Hollie, one of our newest recruits to LKT, has now been with the team for several months and gained an excellent insight into all aspects of a career in translation, working closely alongside Catherine, her Senior Translator mentor. In this first part of a two-part post, she looks back on what she has learned so far and gives us some great advice for those just starting out, and the more experienced among us. As part of our 15th anniversary celebrations, Hollie has even crafted her advice into 15 bite-sized tips for us. Over to you, Hollie! 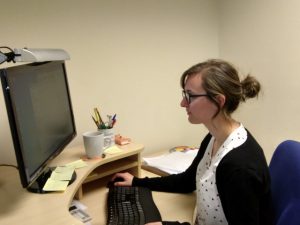 1. Knowing what you want will help you get to where you want to be

When I was deciding on the next step to take on my journey into the world of translation, I had very a very clear idea of what I wanted. Still relatively fresh out of university, I was looking for an in-house position that would allow me to put the skills I had worked hard to develop so far into practice, while also learning from other members of an experienced translation team. I wanted regular feedback so that I could learn from my mistakes, as well as advice and encouragement on what I was doing right. I wanted to be able to track my own progress, work with texts from a range of genres, and have a clear idea of how I could move forward, both in terms of my personal development as well as within the company as a whole. LKT’s Translator Academy model truly could not have fitted the bill any more perfectly.

2. A solid foundation is crucial

The training I underwent during my first week at the company was simultaneously exhausting and exhilarating. In just four short days, I was introduced to all the key in-houses processes and procedures, from setting up project folders and deciphering purchase orders right through to navigating style guides and filling out time sheets. My main trainer and mentor Catherine and I discussed translation and revision techniques and best practice for communicating with customers, as well as research skills for pinning down tricky terminology. I also received training and became certified in the main computer assisted translation (or CAT) tools we use at LKT. Safe to say, I was quite exhausted by the end of it – but the skills I learned in just this short amount of time soon proved invaluable when it came to starting “live” project work at the end of that very first week

3. Asking for help is never wrong

I remember hearing the phrase “there’s no such thing as a stupid question” in my first term at university – and still often being too scared to ask questions for fear of – you guessed it – looking stupid. This mentality went out of the window entirely in my first couple of weeks at LKT. If you’re unsure of something, double checking is always better than muddling along and potentially creating more work for yourself and others later down the line. I knew I could always turn to any member of the team for help with any questions I had in those early days – and I’m still doing the same seven months down the line. Whether you’re struggling with a tricky sentence, a puzzling new piece of terminology (and we all know there are plenty of those), or aren’t sure on the delivery procedure for a certain customer – no question is ever too much. The same goes for asking questions of our customers. Sometimes the source text might be ambiguous, or might feature an in-house acronym you couldn’t possibly be expected to know. Asking questions in this case doesn’t mean you’re a “bad translator” – it means you’re a conscientious one who’s capable of asking the right things at the right time.

You can spend forever crafting a beautiful sentence, but if your terms are all wrong, you’ve essentially just got pretty nonsense. The right word might not always be the most attractive one, the most exciting one, the most captivating one, the most enrapturing one, the most resplendent one, or the most splendiferous one (yes, that’s a real word) – but if it’s the right one for the context, then that’s the one you need. I’m not quite sure how translators coped in the age before search engines and online dictionaries. The turnaround certainly can’t have been as fast when the only reference sources available took the form of actual paper books with pages to be painstakingly leafed through rather than websites with pages to be scrolled through and keyword-searched in just a matter of seconds. As part of my initial training, I learned how to use my best judgement as a springboard to finding just the right term for the job at hand, how to cross-reference sources, and how to pick the best sites to back up the decisions I made during the translation process.

This was one of the first nuggets of wisdom my mentor Catherine passed on to me. While it might not sound particularly groundbreaking, it’s something I keep in mind for every translation I do. Of course we look up the terms and the concepts we aren’t familiar with, but looking up those we think we recognise but aren’t quite sure of is just as important, otherwise you run the risk of making errors that could easily have been avoided. Take the verb fulfil, for example. Presently the bane of my translator life. The infinitive form of fulfil has just one l in UK English, two in the present participle (fulfilling), one in the noun form (fulfilment) and two in the past participle (fulfilled). In US English, the infinitive (fulfill), present participle (fulfilling), noun (fulfillment) and past participle forms (fulfilled) all have two ls. It’s one I always have to check, even when I think I know how many ls I need. Similarly, things you might be convinced you know might actually be different depending on the context. And with customers continuously updating their requirements, it’s important to make sure you’re always up to date.

6. Feedback and constructive criticism are essential if you want to grow

Feedback is always something I’ve always valued, right from being at school all the way through university and up to the first couple of years of my translation career. For me, learning from others is just as crucial as learning things for yourself. Other people, particularly those with more extensive or even just different experiences to you, can offer a range of perspectives that you might not have considered, or can provide helpful tricks that they’ve picked up along the way. The important thing to bear in mind, though, is that while not all feedback might be entirely positive, it’s all valuable as long as you see it as being constructive. Suggestions on different phrasings don’t necessarily mean that what you had is “wrong”, just that someone else would have done it differently, which, on balance, might be better for the particular context. The key is learning from feedback rather than seeing it as an attack or simply dismissing it out of hand

All newcomers to LKT start out at a slower pace than the more experienced members of the team. As we progress through our training, our pace increases, and we work towards translating at a consistent rate while maintaining the highest degree of quality. At each stage of our progress, we are given contingency time, which serves as a kind of buffer to make the transition from one rate to another more manageable. When I first started at the company, the idea of being able to actually achieve the full production rate seemed a distant dream. I honestly couldn’t see how it would happen, though I knew it had to be feasible, since the more experienced members of the team had all worked their way up to it following the exact same process. Five short months later, I reached my full production target. It’s definitely one of my proudest moments so far at LKT.

8. Having good people around you is indispensable

I doubt many people would disagree that having good colleagues has a huge impact on your happiness at work and in life in general. I couldn’t have asked for a kinder, more supportive group of people to work with at LKT. Everyone has been through the same training process, so they all appreciate just how much effort is required to get up to speed while still maintaining the highest standards in your work. Each and every member of the team, as well as our pool of dedicated subcontractors, is friendly, understanding and eager to help, and I’m extremely grateful for the friendships I’ve been able to forge with my colleagues both in and outside of work – from bonding over language puns and puzzling over tricky constructions to going on theatre trips and breaking out of escape rooms together! I feel extremely grateful to have met and to get to work with such good people.

Today we're delighted to welcome back team member Becca after her maternity leave - lovely to have you back with us, Becca! 😊
h J R
@lk_trans

Today's texts have contained a lot of those words that translators from 🇩🇪 know and love(!) ▶️jeweils (and its fri… https://t.co/V5FqlIA5sl
h J R
@lk_trans